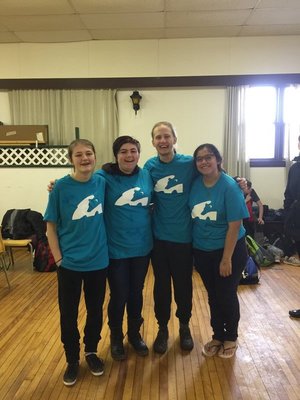 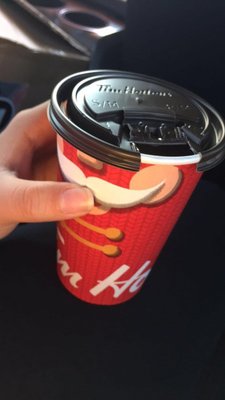 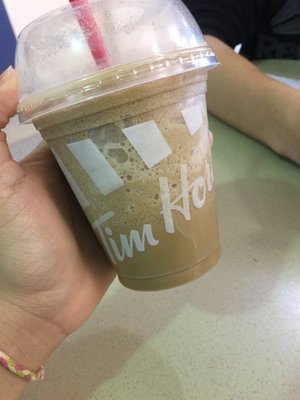 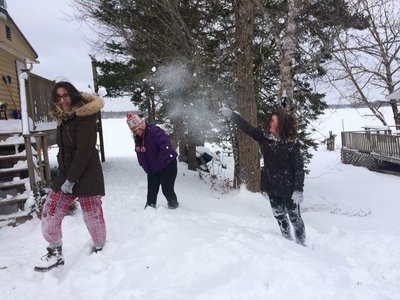 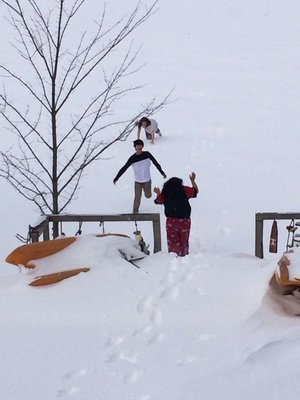 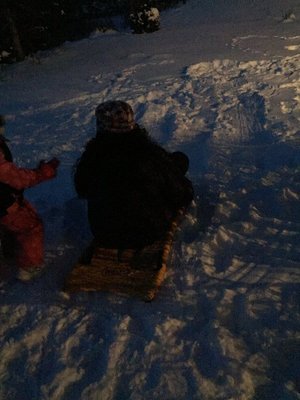 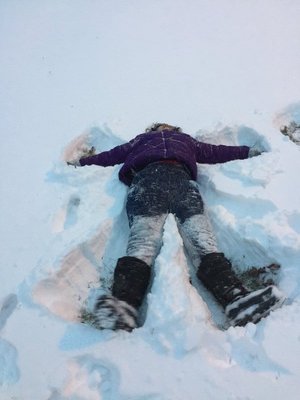 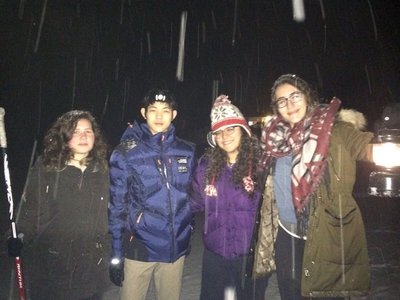 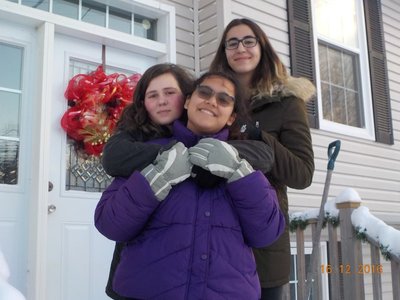 Hi, my name is Rosa, I'm 17 years old and I want to share my whole experience living in Canada, this post is about winter activities.

Polar Bear Dip 2017
On the 1st of January people jumped in the freezing water of the Atlantic Ocean, also donating money to Feed Nova Scotia. Every year in Herring Cove, they organized the Polar Bear Dip to keep the tradition alive and raise money from the crazy jumpers. At the Dip there was a man who is 82 years old and has been jumping for 20 years; he is my hero

With my friends we went to Herring Cove for the registration. Even though we went early a lot of people where there already. We waited for hours and I was feeling the emotion going through my veins. After every second I was getting more excited, but when there were just 10 people before my number (I was number 89), the nervousness took the place of all the emotion I was feeling. Ten people later, it was my turn. I was shaking and not because I was cold, it was because I was nervous. I went to the waterfront and the only thing that was on my mind was “why am I here?” I was telling to myself the same thing that the old man told us, “don't think about it, just jump”. I did. I stopped thinking and I jumped. I'm not able to explain what I felt because I wasn't feeling anything. I knew I was alive because I was seeing everyone cheering and I was breathing, that was the only way I knew I was alive. When you are walking to get your clothes change, your body starts getting warm and you get used to the cold, but the pain that you feel in your fingers, feet and all your body in unbelievable.

The Polar Bear Dip is an experience that you can tell tons of times and it's going to sound crazy, but you have to experience it to know how great it is. All the emotion that comes with the jump, all the people having fun. There is no better way to start a new year than jumping in the freezing water.

After we jumped in the freezing water

Tim Hortons
I learned something in Canada; it’s never too cold for an ice capp. It doesn't matter what the weather is like, there is always time to go to Tims for coffee, tea or hot chocolate too.

Snow
I saw snow for the first time in Nova Scotia. The way the snow makes me feel is amazing, it’s just beautiful. The trees full of snow, going for a walk and see everything cover with snow, its amazing.

The snowball fights take more energy that what it looks like and holding the snow is more difficult that what people think.

Running outside to play in the snow just wearing pjs is one of the most amazing experiences in my life, and it's not about being crazy is about making memories with your friends.

Snow sledding; the way the air hits your face makes you feel alive.

Snow angels; I always thought it was really easy. I was wrong, it takes time and effort, because it's hard to move the snow without messing up the angel. It’s fun though.

Skating
This one might be worst one. I CAN'T EVEN STAND WITH THE SKATES! It's really hard and I saw Hannah doing it really easy and that makes me wonder how does she do it? But she said she was just like me in her first time, so I guess I just need to keep practicing.

Jackets, gloves, winter hats and temperatures in the negatives numbers
Good news, we went already to -21 and I’m still alive. Some days I need to wear two pairs of jeans, a shirt, a sweater, a jacket, gloves, a hat and two pairs of socks; but there's nothing that warm clothes can't handle. After the Polar Bear Dip I will never complain about the cold, but getting dress for the school is a challenge every morning.

==It's the most beautiful time of the year==
It's me Sohrab and I'm super excited to tell you about my favourite month of the year!!!!
Christmas has always been my favourite time of the year. The lights, the decoration, the cookies and of course Santa Claus. But it was actually the first time for me celebrating Christmas. Yes, you read right. I'm a muslim so we don't usually celebrate Christmas but I still love this time of the year. And I even loved it more this year than ever before. 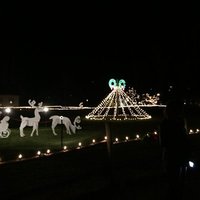 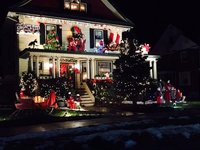 Decorations!
I might haven't celebrated Christmas before but we do had a tree at home! Well, that's what I thought since I saw our trees here in my new home....compared to that our christmas tree looks like a broccoli.

But we also had some great decorations all around the house, it was pretty and so much fun to put them on!

Snow
Finally Canada's best friend visited us in Nova Scotia and he had some big luggage with it. You couldn't tell the difference between road and sidewalk. But it was fun because we never get that much snow in Germany. I loved it!
And then there was the shoveling. I thought it just hard work, but it can be so much fun! Our shoveling ended with a snowball fight and someone barried under the snow... 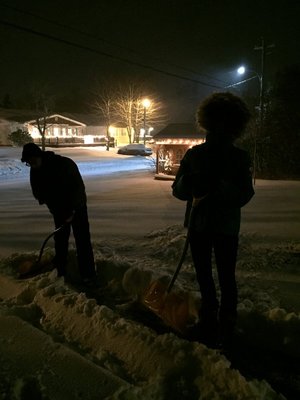 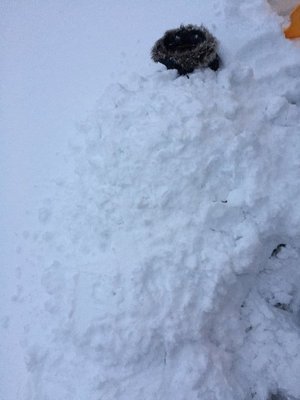 My Birthday
Christmas wasn't the only reason to celebrate this month. On the 15th of December I finally turned 17 and it was the first Birthday I did not spend with my family at home or my friends. But it didn't bothered me at all. I had a great new family sitting with me and celebrating this special day with me and a really good friend. 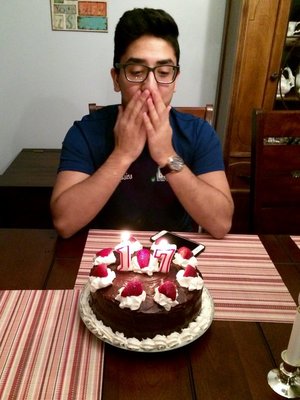 Christmas & Christmas Dinner
On the 24th it was finally the time. Christmas! Waking up at 6 in the morning wasn't that fun but all the presents made me forget how sleepy I was. I honestly have to say that I've never received Christmas presents before and I never gave someone one, but having this moment was great. And I'm not gonna talk about all the presents we gave each other because that's not what Christmas is about. I noticed it in the moment we were sitting in the living room and opening up our presents and I kept noticing it through the whole weekend. It was the joy of giving and the smile on someone's face what makes you enjoy Christmas. The time spending with your family even if it's just for presents or for a Dinner, this is what Christmas time means to me now and I'm thankful to my family and friends here that I was able to learn that because this is an experience that is unique and I'll never forget. 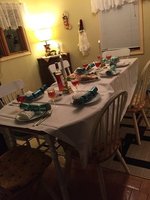